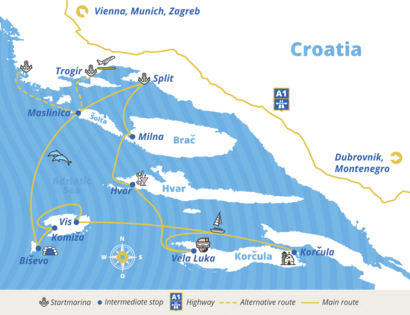 The Croatian harbor city of Split is the ideal starting point for a cruise in the Adriatic sea between the famous and beautiful Croatian islands of Hvar, Korčula and Vis.  The capitals of each of these islands are cultural highlights, and you’ll be able to see Byzantine Fortress Spanjola, the cathedral of Sveti Marko and the remainder of an epic sea battle. Discover the Blue Cave of Bisevo, an ethereal glowing blue grotto and natural treasure – and spend a lazy afternoon sunning and swimming in the beautiful island bays.

For those who love to experience a place through its food, we are delighted to offer the “Culinary Package” which will treat you and your fellow shipmates to the best local and regional cuisine of Croatia. Join us on a weeklong yacht adventure – a cultural and culinary treat that you’ll never forget.

Your adventure starts in the Split harbour, the ancient center of the city and a UNESCO World Heritage Site.  Make sure to visit Diocletian’s Palace, a landmark historical site built for the Roman Emperor Diocletian in the fourth century AD. Step into what once was a majestical seat of a former emperor of Rome and imagine what it was like - back then when the emperor didn’t even have to leave the ship’s deck to enter his palace. Take a stroll around the town’s market, and pick up some Fritule, dalmatian-style doughnuts, before you sail off.

On the island of Brac, you’ll find the most beautiful beach in the entire Adriatic. A simply fascinating white pebble beach, that stretches out like a white tongue - and is ever changing according to the weather and the tides. We’ll anchor at the Golden Cape at Zlatni Rat beach so you can swim over and have a stroll on the beach. Afterwards, head on over to the small town of Milna, where you’ll find ancient and beautiful stone houses beneath the palm trees - a truly tranquil place to fade out the day.

Your next stop is the island of Hvar, whose town center Pijaca Square is home to the stunning Sveti Stjepan Cathedral and a host of traditional restaurants (konobas), bars, and local shops. Guarding the city of Hvar atop of a hill lies the Byzantine Fortress Spanjola, where you can gaze at the crystal clear blue waters below you and even spot the neighbouring islands. Hvar is also home to a number of beautiful bays – after you’ve explored the historical town center, anchor over in one of the bays to take a dip into the splendid waters of the adriatic.

The town of Korcula is known as the jewel of Croatia. Located on a peninsula and at the feet of a giant mountain ridge, Korcula sits between rugged, craggy mountains and ethereally crystalline turquoise waters. Legend has it that Korcula is the hometown of Marco Polo - you can visit the Museum and the Tower devoted to the medieval merchant and adventurer. You’ll also want to visit the Sveti Marko cathedral, built in the 15th century, where you’ll find the gorgeous altarpiece painted by Tintoretto. During the summer season, the town is known for hosting a vast number of events, the highlight of which are the church processions, that the island is known for.

The former military island of Vis is today one of the most popular travel destination of the region since it opened to the public in 1989. Once the scene of the epic sea battle of Lissa, fought between Italy and Austria in the 19th century, it’s now an island for both discovery and relaxation. Surrounded by sunken shipwrecks and other spectacular underwater sights, Vis is home to a impressive military museum as well as a former submarine bunker.  After your history lesson, head on over to the beach for to take your first diving courses or stand-up paddle for the first time.

A trip through the islands of Croatia isn’t complete without a visit to the Blue Grotto in Bisevo, just a few miles away from Vis. The beautiful sea cave, accessible only by boat, features a grotto almost 15 metres high, but an entrance that is narrow and only a few metres wide. You can either swim in or enter with a smaller dinghy to behold one of nature’s most magnificent sights. Once inside, you can admire the rare spectacle of sunlight shining through the waters, painting the whole cave inside in a beautiful blue.

Split is easily accessible via the Split-Trogir airport, which is located a short half an hour away from the port. We are happy to help organise your arrival, so that you’ll have the most comfortable start to your island hopping adventure in Croatia! 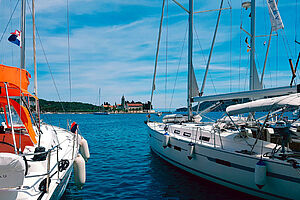 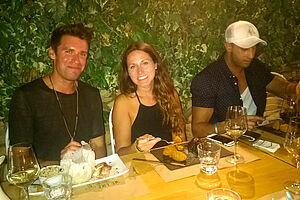 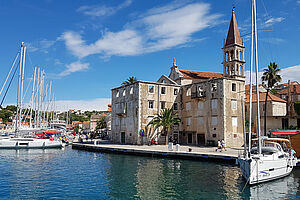 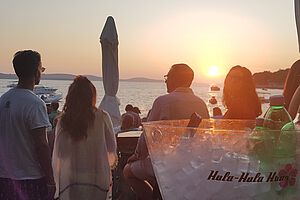 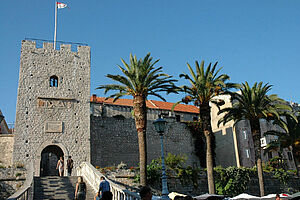 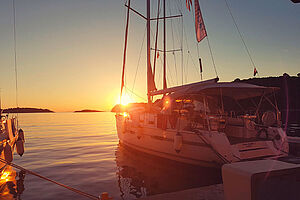 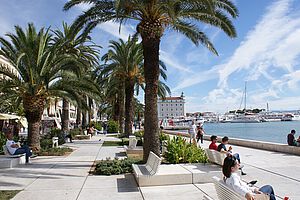 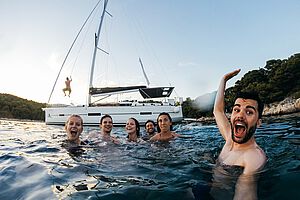 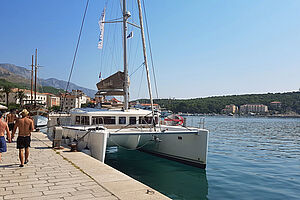 Minimum participants: 4 people | if there is cabin booking (1-3 pax) other persons will be added. All quoted prices are final according to §19 UStg
If you do not choose according ADDITIONAL packages, fuel and final cleaning (~€130,-) has to be payed from the boardkitty on spot